Senior Athletes Who Inspire Us to Exercise

Home Blog Senior Athletes Who Inspire Us to Exercise
NextPrevious

Senior Athletes Who Inspire Us to Exercise 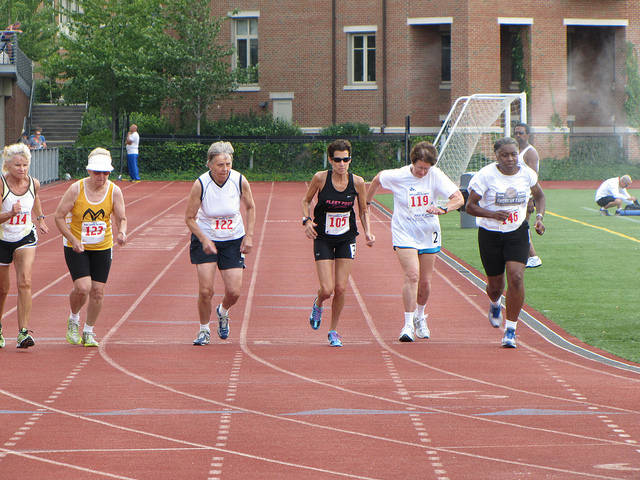 Think you’re too old to become an athlete? That your knees “can’t take running” or that you simply don’t have the stamina? Hardly. Studies have shown that exercise—even a few days a week—can increase longevity, assert independence, reduce risk of falling, improve cognitive skills, reduce risk of heart attack and stroke, and provide satisfaction and happiness through old age. Not only that, retired people have more time to dedicate to exercise, which means there’s one less excuse why you can’t hit the gym. While you don’t have to become one of those record-shattering senior athletes, you can still pick up new skills that you didn’t get to try earlier in life.

Here are a few inspiring senior athletes who continue to train every day and even set records.

Julia Hawkins, 101. A former cyclist who placed gold in several national competitions, she stopped cycling competitively at 80 and picked up running at 100.

DeEtte Sauer, 75. This swimmer was once considered obese: nearly 250 pounds through her 40’s. She finally started exercising and lost 100 pounds. But she didn’t get into the pool until she was 58; shortly after, she began competing. She has entered the National Senior Games for the past eight years.

Ed Whitlock, 85. He’s the oldest person to have run a marathon in under 4 hours (at 3:56:34). A runner in his childhood and through college, he quit for two decades before picking it back up at 41. His ability to race without a trainer, in 15-year-old sneakers, and set records (2:54:48 marathon at age 73) has doctors and scientists studying his physiology.

Ida Keeling, 100. As a kid she preferred jump-roping and riding bikes, and she was fast if she ever ran. But there were few opportunities for girls, and especially black girls. She raised four children; two boys died from drug-related incidents, and fell into a deep depression which affected her blood pressure and health. At 67, her daughter, a track-and-field coach, got her to sign up for her first race. Since then, she’s been competing and breaking records in 60-meter dash and recently, the 100-meter dash for her age group.

Täo Porchon-Lynch, 98. This famous yoga instructor (famous because she’s still teaching at 98) has become a face for the elderly. Growing up in India, she first discovered yoga at age 8 while watching boys go through poses on the beach. She worked as a dancer through Europe but continued to study yoga. She settled in the suburbs of New York, but it wasn’t until after her husband died in 1982 that she recommitted to yoga. Today, she teaches yoga and ballroom dance and enters ballroom competitions. She also travels worldwide to teach yoga and recently danced on “America’s Got Talent.”

If you’re inspired by these senior athletes and are interested in starting a new physical activity or sport, consult your doctor and physical therapist to help coordinate a training program that’s tailored to your needs and goals.